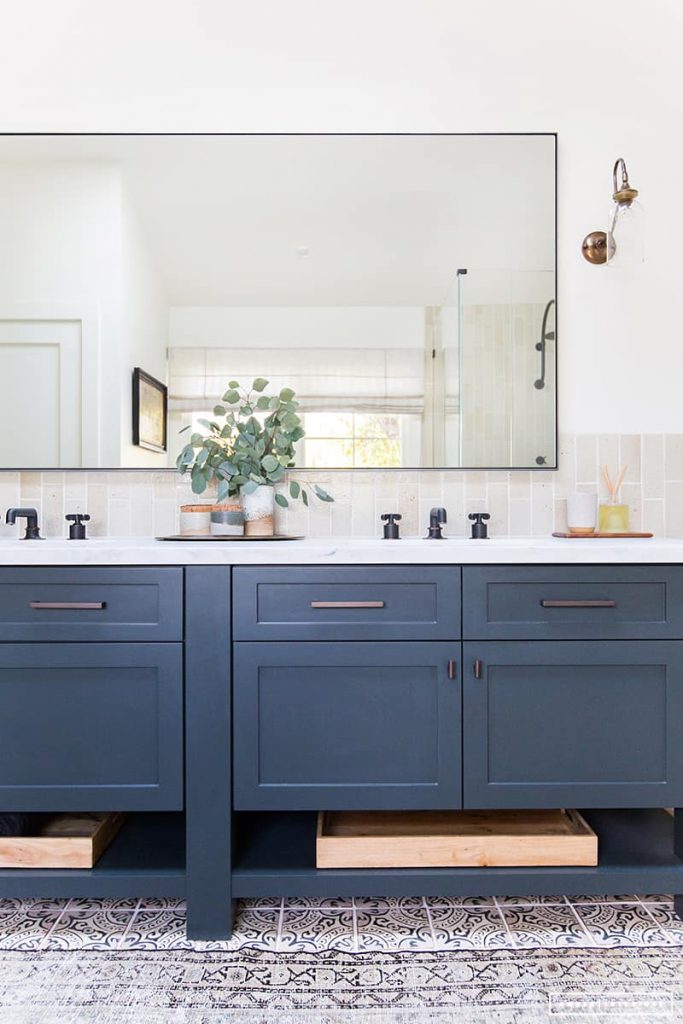 Having a master suite is a bit of modern idea. Just like our fancy phones and their interwebs, you didn’t need them before they existed, but now you can’t seem to live without them. In 1930 you would have been hard pressed to find a house built with an ensuite. Crhacienda is weird in that both of the bathrooms are Jack-and-Jill, so we didn’t have the private space that we were used to when we lived in our condo. Having a master suite is better for the value of the house, and it’s an investment we will get a lot of enjoyment out of. Eventually, our master bedroom will become my office, or maybe even a guest bedroom, and having a private bathroom for that space is a big “nice to have”. 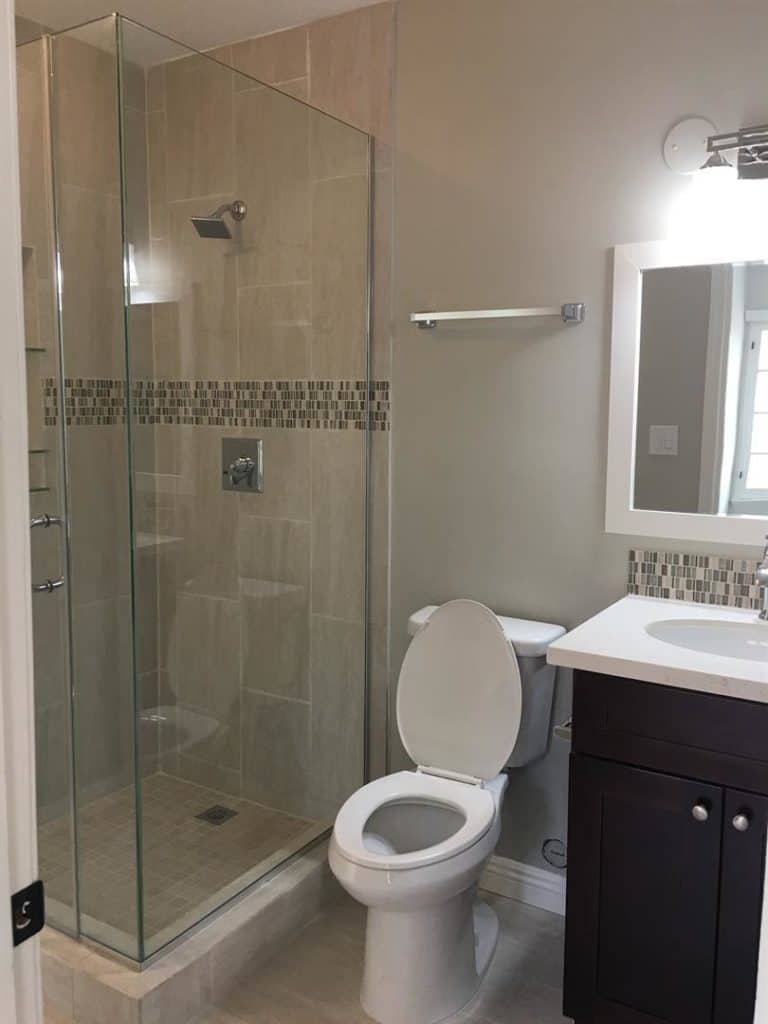 Do you need a reminder of what the master bathroom looked like? I’m just throwing this out there, I’m way over mosaic glass tile. There, I said it. It’s just oversaturated the market, it’s available everywhere, and the patterns just feel too “done”. It was new and different in the early aughts but now it’s time to move on. That is one joy of backsplash tile, they don’t have to be budget busting if you want to replace it. In my case, I decided that if I wasn’t replacing the mosaic in the shower then I would leave it at the vanities too.

It just doesn’t make sense for us to invest in replacing all of the finishes in the bathroom. The tile isn’t completely offensive, so our refresh of the master bathroom is a blend of cosmetic and functional changes. Its not the forever plan for the space, but we’ll get more enjoyment out of it for the time being.

The original layout for the master bathroom wasn’t great, as you can see below. 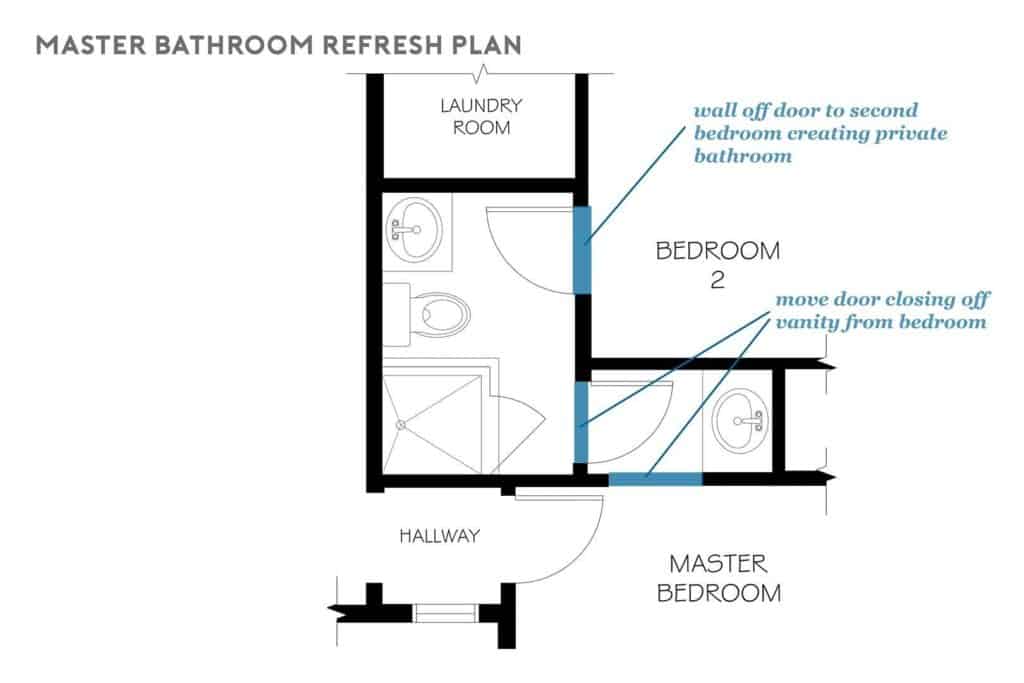 The first problem we’re solving is making this “our” bathroom by walling it off from the second bedroom. The second problem is being able to close off the bathroom so both vanities are enclosed in the same space. That weird stand-alone vanity is an awkward spot for sure, but after living in the house a few months we realize that we need that second vanity. In one iteration of our remodeling plans we talked about returning that vanity space back to the second bedroom as a closet. For several reasons that I’ll post about later, this didn’t work. I think the new door location makes the most sense so we can block noise and light from the bathroom. Some mornings when Sean is already up and getting ready I want to keep sleeping. Even if the door will end up open most of the time, it’ll be nice to have the option to close it.

Now on to the design plan: 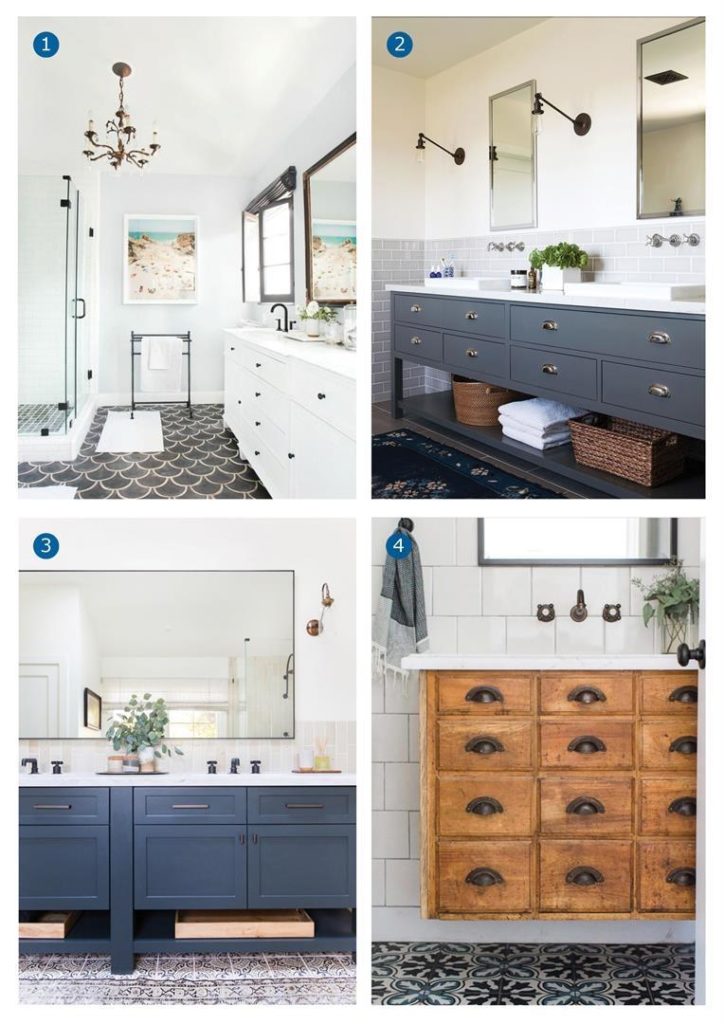 After pinning so many beautiful, more traditional Spanish bathrooms (think patterned tile and aged metals), I realized the direction I wanted to go with the bathrooms was going to incorporate an old world influence. When we first bought the house we imagined we would want to take a modern bent on the traditional Spanish home. But I kept going back to Mediterranean patterns, textured tiles, and industrial elements. All of these finishes felt more relaxed, approachable, casual – more in line with the way we live in our home.

I wanted to incorporate pattern, but since we aren’t changing the tile, we needed to add it in a different way. I knew I could find a wallpaper to bring in pattern without it getting too serious or feeling dated. The right color on the vanities would add a level of sophistication to the otherwise boring builder-grade fixtures. 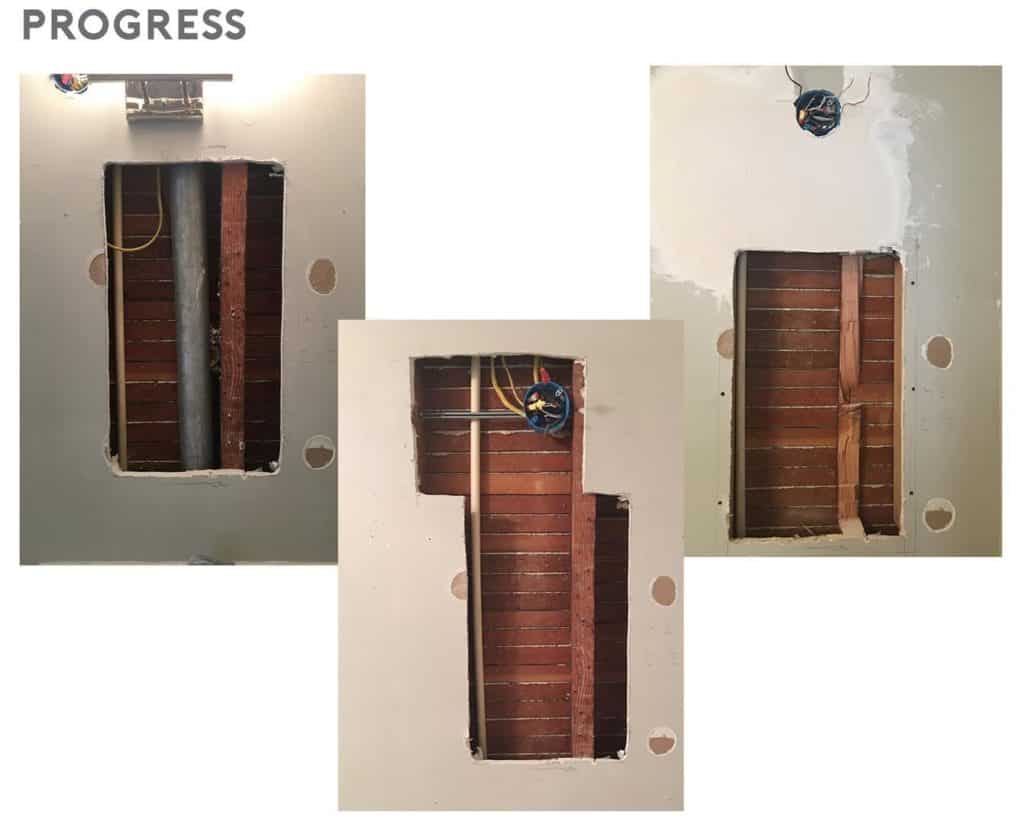 Since neither of the vanity cabinets have drawers, we decided that we were going to install upscale medicine cabinets. We’ve just been leaving everything out on the counter until the housekeeper comes every other week (yes, I know, #firstworldproblems). 5 minutes before their arrival I just dump all our lotions and potions into a box and throw it into the cabinets. The messy counters were putting Sean and I on edge. Medicine cabinets prevent axe murders. People don’t talk enough about this. It’s a serious issue. #sanityvanity

So cue us opening up the walls to install the medicine cabinets, where we were lucky the bathrooms were new construction with drywall vs. the plaster walls in the rest of the house. See that big metal pipe in the photo above? That’s the house’s original chimney flue. The living room is right on the other side of that wall, and our best guess it that when someone decided to remove and close up the fireplace they just left the flue in the wall.

Before taking the pipe out I crawled up in the attic where we were relieved the flue had been capped off and the roof repaired years ago. Getting rid of that pipe also meant we could now center the light above the vanity. Thus ending my OCD rage.

One other small bump in the road was our air conditioner’s condensation overflow line (the white pipe in the photo). We weren’t going to change the plumbing for this so we opted to mount the medicine cabinet about 3/4″ out of the wall instead of completely recessing it. That left enough room for the condensation line. Once we trimmed around the medicine cabinet it was hardly noticeable. The stud on the right side of the photos got cut and we framed around it so there’s no structural impact on the house. Sort of like putting in a window.

But none of this is the pretty stuff you came here to see! I initially created the mood board with the sky as the limit, what it might look like if I was touching every surface. Obviously that has been scaled back, but I still left a tile option I had considered for the shower and the backsplash. Its a subway tile with a handmade look, but not the handmade price tag. Most of these items have already been purchased and are coming together nicely in the room. Work is still continuing so some of the final details aren’t decided yet. 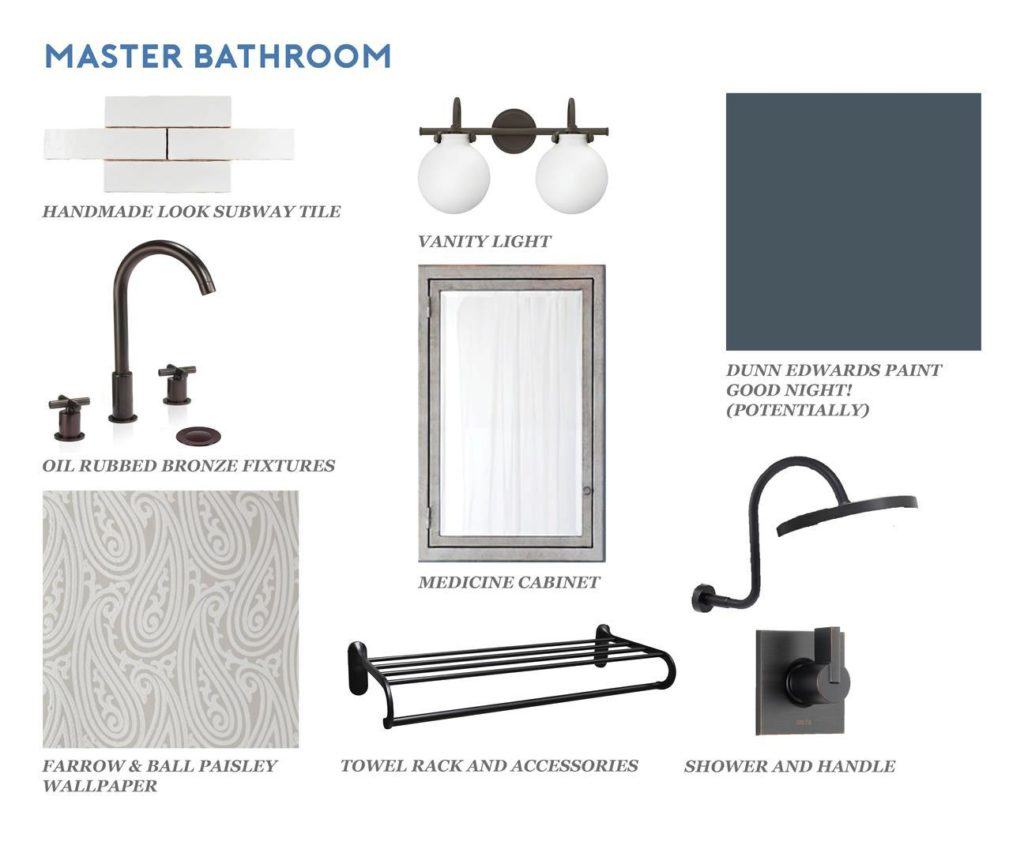 Sure, I’m not quite settled on the color for the vanity cabinets yet, but I’m working on it and I’m most definitely leaning into those deep blue or teal zones. It’s going to have a masculine energy with the dark metal finishes and the neutral paisley print. Thing is, if I ever did tire of the paint color (yeah right!), that would be much easier to change than any of the other finishes.

All the oil rubbed bronze is from different manufacturers which means there is variability in their finish. Some of them read almost black, others have more of a dark brown with highlights in it. Thing is, once they are all in the room you aren’t looking at just one of them and comparing it to another. They all work together because they have more in common than they have differences. Whoa, that got deep into a kumbaya moment.

Stay tuned for more progress on the master bathroom and to see how the plan comes together. Follow along on my Instagram stories to catch more sneak peaks too!