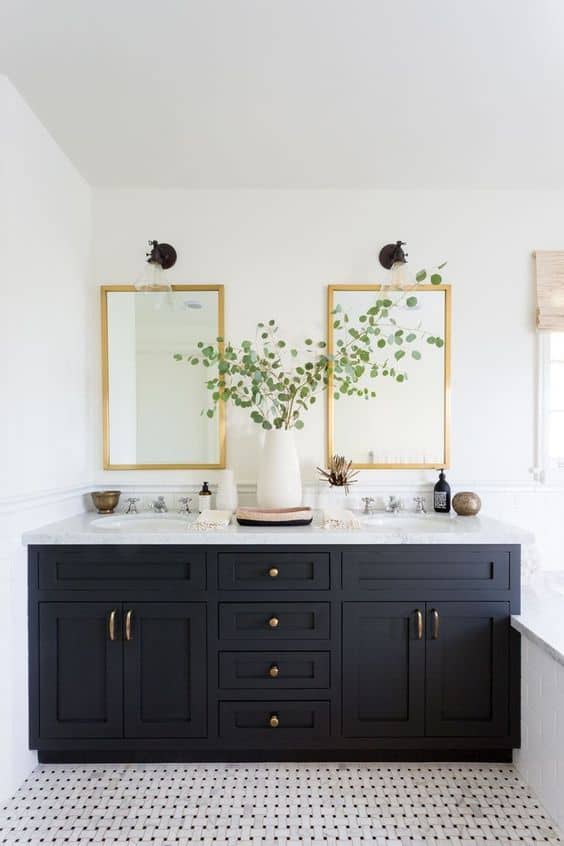 In the last month I started working on a bathroom remodel for two of my dearest friends, Jamie and her husband Dwight. The whole project started when Jamie asked me to look over the plans her landscape designer had proposed for her backyard. At the time, I had just finished the Crhacienda front yard and she was looking for a second opinion on what her designer presented. In short, Jamie wasn’t happy with what he planned and she decided to hold off on her backyard project for a while. Instead, her focus moved inside the house to projects that she and Dwight have been wanting to do. Home projects have the tendency to turn into what I like to call the “When You Give A Mouse A Cookie Syndrome”. Named for the 1985 children’s book following the tale of mouse who gets a cookie. Soon the mouse wants a glass of milk, and then a straw, and then a napkin, and so on and so on. One thing always seems to lead to another with home projects, and Jamie and Dwight had narrowed in on their bathroom as the first hurdle.

Most designers will tell that they would prefer to do a whole house at once, since it generally streamlines everything and often saves the clients some hours/money in the long run. But let’s be real, most clients can’t afford to remodel their entire house at once. Jamie and Dwight are planning to complete a number of their home projects in stages. I was thrilled when they asked me to help with their bathroom because they’re just cool people. They’re both artists and educators, and they have a laid-back energy that has always made our friendship so easy. Turns out, that same energy has also made them dream clients to work with.

Jamie’s grandparents were the original owners of the house when it was built in 1951, but Jamie and Dwight have called it home for the last 10 years. It’s a typical Post-War style house, which is not to sound disparaging – but Post-War homes are known for being more ordinary than interesting. They make up for their lack of artistry by being solid and durable. While Jamie and Dwight have made some updates over the years, there were no major architectural jumping-off points for the interior design. Part of me loves that as a designer since it gives me a blank slate, but I love to use a home’s innate style to influence a design so the final result doesn’t feel forced or out of place. Jamie and Dwight want their home to feel relaxed and youthful, but still classic and not trendy. They’re goal is to invest wisely, so the house doesn’t feel dated in 10 years. We’re aiming for that sweet spot between classic/traditional and modern.

Five years ago, Jamie and Dwight remodeled the bathroom, which hadn’t been touched since 1951. And now you find yourself asking “Why are they doing it again so soon?” Well, in an effort to save money they worked with an unlicensed contractor. While he did save them money, the workmanship just hasn’t held up. Floor tiles are coming loose, moisture builds up in the room because the ventilation fan isn’t working properly, and the tiles he cut around the tub enclosure are poised to attack your knees leaving you like a 1994 Nancy Kerrigan (too soon?). The only reason they put this off for so long was because of the expense and the inconvenience of construction (especially when they only have one bathroom). No homeowner is jumping at the prospect of showering at the gym and/or using their nearest family member’s bathroom for 3-4 weeks. 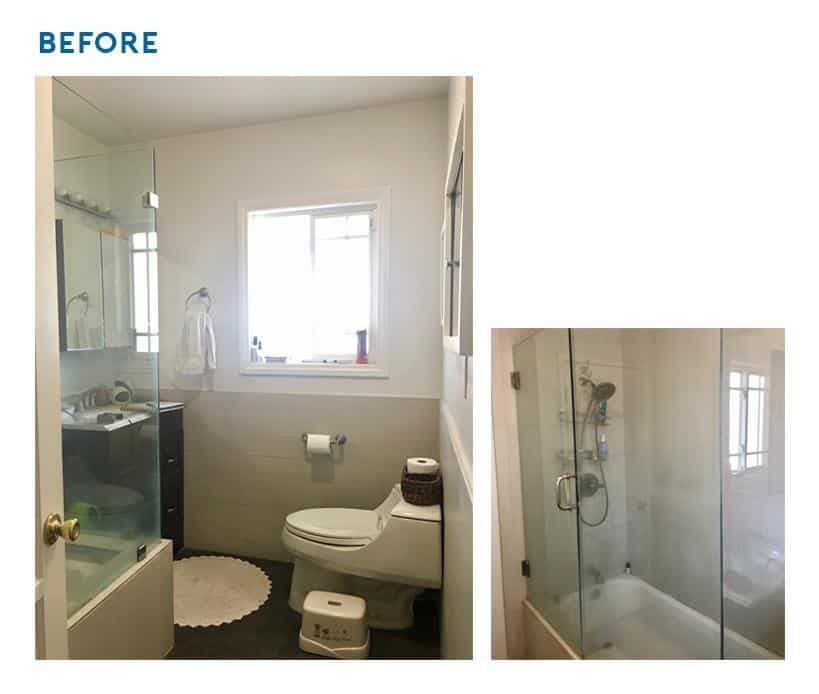 The room as it stands is relatively efficient. For the sake of the budget, we’re not going to change the location of any of the fixtures. It’s already expensive enough remodeling a bathroom, and if we leave the plumbing where it is there is a significant savings. We are planning to change the door swing so you can see the shower when you open the door. It just makes sense to see more of the room when you open the door and it will create a greater sense of space. We’re also going to solve some of the storage problems in the room while we’re at it, and clean up some of the detail work that the first builder missed. Most contractors aren’t known for their detail work, they often don’t realize something will be a problem until they’re installing.

Are there things I would want to change here if I could? Yes. For one: Bam! There’s a toilet right when you open the door. It’s not my favorite thing having the toilet as the first impression of the bathroom, but we’re going to work with it. A lot of small fixes will help modernize the bathroom. My role as Jamie and Dwight’s designer is to proactively plan their remodel so there are no last-minute runs to the hardware store to pick something out, or to feel pressured by the contractor’s recommended solution. There are always last-minute issues during remodels and my job is to ensure that they are managed in-line with the design plan. 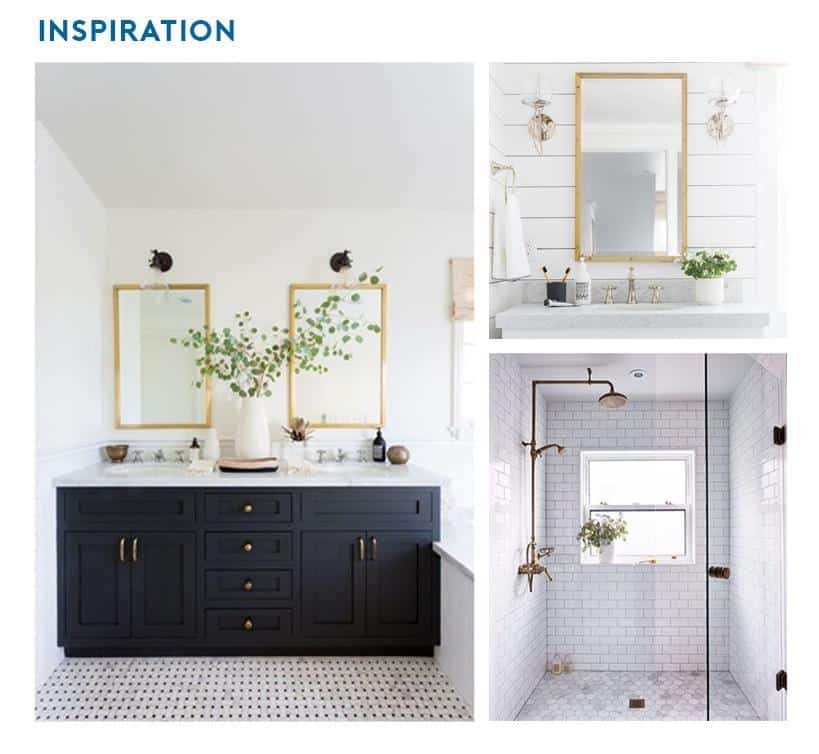 During my first conversation with Jamie she said that she wanted the bathroom to have white surfaces, that anything too dark makes her feel like it’s dirty. In my head I did some cartwheels because I love a bright white space. We’re going to set the foundations of the design off of a classic hex tile on the floor, and an updated subway tile in the tub and shower. The before bathroom was tiled half-way up the wall in a move that screamed early aughts restaurant bathroom. Sure, it can make things easier to clean, but it can also make a room feel cold and sterile. We’re not going to tile the entire room to save some money, but we are going to tile the entire wall that the shower and vanity share to create continuity across that space. 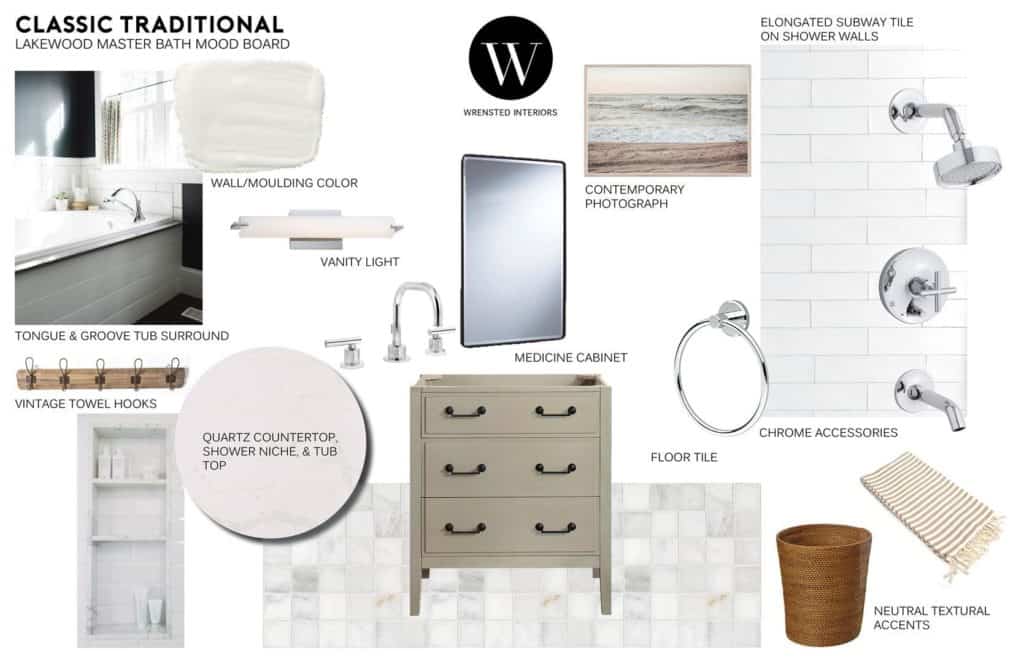 Small things make a difference in a small space, so we’re going to start by recessing the medicine cabinet where Jamie and Dwight currently have a surface-mounted cabinet. We’ll also be installing a large shower niche for all their sundries instead of the shower rack which creates visual clutter. You’ll notice a balance between warm and cold in the finishes; where chrome certainly feels adult, it can also feel cold so we’ve introduced some aged bronze to warm it up on the new medicine cabinet and vanity handles. To keep the subway tiles from feeling to clinical we are using a natural marble with warm tones on the floors. A warmer quartz material is going to be installed around the under-mount tub, in the shower niche, and on the vanity. Finally, texture will be introduced through fouta-style hand towels, a woven waste bin, and vintage inspired towel hooks.

I’m already in love with this bathroom! Working with Jamie and Dwight is an extra bonus, they trust me and they know that I’m going to keep their best interest at heart. It just breaks my heart that there are so many tradespeople out there providing sub-par work and taking advantage of their customers’ hard-earned money. You’ll have to keep your eyes on the blog in the coming months as the project gets underway. Do any of you have horror stories from working with an unlicensed contractor? And how long did it take you to fix their work?